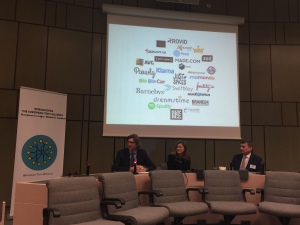 The many entrepreneurs present at the event praised the European Commission for its efforts to set up a digital single market, key step to improve the competitiveness of the European digital economy. The plan promises to put in place a clear set of rules and regulations valid for the whole continent, in place of the current patchwork of 28 national legislations. European Commission Vice President Andrus Ansip blessed the creation of the Alliance. In his keynote, he explained that the main challenge faced by young entrepreneurs does not lie in the creation of a new company, but consists in the development phase, that is the scale up process. A common market for the digital sector would prevent that many of the local entrepreneurs flight to the US, in search of a bigger and more homogenous marketplace.

Niklas Zennström expressed confidence in the growing European startup scene.“There are so many European tech company success stories. We think that we are able to help European leaders understand that Europe is good at tech and show how policymakers can clear the way for the tech industry to grow further”. 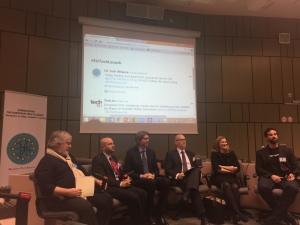 The discussions touched upon the existing challenges for a European-level scale up. These include excessive market fragmentation, high costs of parcel delivery, challenges to employ people across Europe and outside Europe, difficult VAT regimes, complicated data privacy rules, excessive bureaucracy, and a general fear of failure.

Internet is global. 21st century tech companies are global in mindset and this means they have the ambition to reach the whole world, not being confined in one country or one region. China was mentioned several times during the debates. China has a market scale and an innovation ambition that can hardly be neglected. With 650M Internet users (of which 550M are mobile users), China is the world largest Internet market. The Chinese government is strongly committed to supporting innovation through the creation of several billion-dollar funds to finance high tech startups. Most of the European entrepreneurs are conscious that China is set to become the largest market for their businesses. Nevertheless, only few European entrepreneurs – rare exceptions are King and Rovio – have effectively entered the highly competitive and increasingly demanding Chinese digital market.

“I welcome with great enthusiasm the establishment of the European Tech Alliance,” says Luigi Gambardella, President of ChinaEU. “I am glad to see that the European tech scene is now organized in one single group committed to making its voice heard at EU level. ChinaEU intends to support European scale ups in the Chinese market, and viceversa favour Chinese startups in their ‘Europeanization’ ambition, by finding the right partners and investors in the respective market. We have in mind the creation of an ad hoc program that brings early stage European entrepreneurs to China to scale up there with financial and technical support”.