By Liu Jia and Gao Shuang in Brussels(China Daily Europe)

“We will push forward digitalization, informatization, exchange and collaboration of cyberspace between China and the European Union,” Lu says. 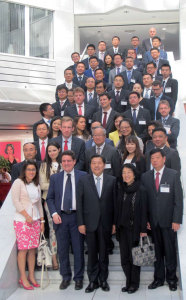 To connect this digital Silk Road, the head of the CAC says they hope to see more Chinese Internet companies going to Europe, and more European enterprises entering the Chinese market, too.

Lu, who is also director of the executive office of the Central Leading Group of Cyberspace Affairs in China, made the first high-level visit by a Chinese official to Brussels since Chinese Premier Li Keqiang’s visit to the EU headquarters on June 29 in conjunction with the EU-China Summit.

Stressing the determination to benefit 1.1 billion Internet users in both China and the EU through broader cooperation in the digital sector, Lu says they are in favor of a platform built on mutual trust and a win-win vision.

“There are still 800 million people unconnected to the Internet in Europe and China, and there is a huge space for our cooperation. We look forward to achieving a better synergy between Europe’s digital agenda and China’s Internet Plus strategy. And we will make our contribution to digitalization, cyber development and cyberspace security,” he says.

The roundtable, organized by the ChinaEU Association for Digital and the Internet Society of China, brought together more than 50 top-level stakeholders in the information and communications technology industry, as well as representatives of Chinese and European banks.

It was announced at the summit that China and the EU will establish a joint investment fund to connect China’s Belt and Road Initiative with the EU’s 315 billion euro ($350 billion) investment plan.

The Chinese initiative refers to the Silk Road Economic Belt and 21st Century Maritime Silk Road, which will use trade and investment to boost ties along ancient trade routes and elsewhere.

The goal of the talks is to seek implementation of the conclusions reached at the EU-China Summit. It aims to explore new methods of cooperation in such areas as 5G, cloud computing, the Internet of Things, big data, e-commerce, digital investment and high-tech startups, and smart cities and smart energies.

“We believe the digital sector is the key,” says Luigi Gambardella, president of ChinaEU. “The time for action is now.”

The China Internet Development Fund signed a letter of intent with ChinaEU at the meeting, and China Unicom and Nokia signed a memorandum to deepen their technological cooperation in the next five years.

According to Lu, China’s Internet Plus covers a wide range of fields, such as energy, trade, health, service and culture, as well as the Internet sector. And the EU is aiming at a digital single market across the 28 member states.

Lu met with Andrus Ansip, the EU’s commissioner for a single digital market, and discussed improved connections between EU and China in the digital economy.

“We see great potential for business cooperation in the digital sector in particular,” says Dominique Leroy, chief executive officer of Proximus, also known as Belgacom, which is the largest telecommunications company in Belgium.

Her company just reached an agreement on research and development with Huawei during Belgian King Philippe’s state visit to China in June.

China Mobile is among the Chinese ICT companies that are deeply involved in the European market.

The EU and China are working on a joint declaration on 5G standardization. The first 5G standard is expected to come out in September 2018 and be deployed in 2020.

“We are ready to win a bright future together with our European partners,” says Li Huidi, executive vice-president of China Mobile.

He says it will improve energy efficiency in industry and agricultural production, and provide better quality in key public services including medical care and traffic control, which will make enormous contributions to the environment.

Shi Dongwei, vice-president of Alibaba, says its goals for the next decade include helping 10 million small enterprises throughout the world survive and thrive.

“And to create 100 million new jobs all over the world, as well as serve two billion consumers globally,” Shi says.

“In view of our worldwide expansion, China is a priority for Digital Bros in 2015,” says Galante, who believes the company, already with a strong presence in Europe and the United States, can become a truly global company only after taking root in Asia.