Keynote Speech at the Networking Event on

“China-EU Partnerships in the Digital Industry” 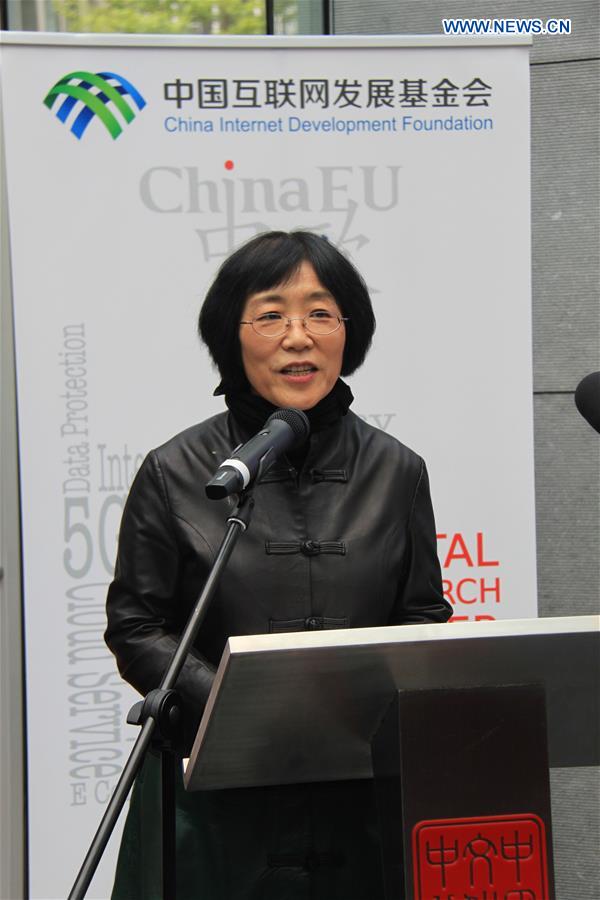 Good evening. On the auspicious occasion of the first anniversary of ChinaEU, I wish to, on behalf of the Chinese Mission to the EU and in my own name, offer our warmest congratulations and best wishes.

As a business-led international association, a top level public-private partnership for ICT, and an incubator for joint business projects and startups on digital innovation, ChinaEU has been pursuing its vision by offering exciting activities and events, and has played an important and active role in promoting cooperation between China and Europe.

Tonight’s networking event organized by ChinaEU offers us an excellent opportunity to exchange views on challenges and opportunities of building China-EU digital partnership with a particular emphasis on how to translate our shared aspiration into concrete projects, startups and tangible benefits.

As a Chinese proverb which goes: cast a brick to invite jade, I will make a humble presentation on China’s cyber economy by way of introduction so that others may come up with valuable opinions on the subject of the day.

With a view to realizing its set objective of building a moderately prosperous society in all respects and in order to avoid being caught in the middle-income trap, China is shifting towards innovative, coordinated, green, open, and shared development with a clear and strong focus on innovation.

In the coming five years, we will build a digital China at a faster pace through the implementation of a cyber strategy and further integration of information technology with socioeconomic development.

With regard to the first area — speeding up the building of high-speed, mobile, reliable and ubiquitous new generation information technology infrastructure, China will build modern communication networks through the new generation of high speed fiber-optical network. China has started to provide 1000 Mega bytes high speed network in urban areas and more than 98% of China’s villages will be covered with fiber-optical network. And China is popularizing 4G at town and village levels, and will initiate 5G commercially in due course.

With regard to the second area — developing modern internet industrial system, China is pushing through the “Internet Plus” action plan to integrate the mobile Internet, cloud computing, big data and the Internet of Things with modern manufacturing; promoting e-commerce, industrial networks, Internet banking and a new ecological system of “internet plus”; supporting higher-tech manufacturing in agriculture, energy, finance, public services, logistics, biology and artificial intelligence; and encouraging internet-based companies to increase their presence in the international market.

With regard to the forth area, enhancing cyber security, to effectively address this daunting challenge, China has rolled out a series of measures, including speeding up legislation on the Internet; enhancing information sharing and supervision over cyberspace; setting up a system of protecting information infrastructure in industries including finance, energy, telecommunications and transportation; and conducting in-depth research into core Internet technology. Accordingly, Chinese internet-based enterprises and academic and research institutions are encouraged to form alliances to improve coordination and cooperation.

The relevant strategies, policies and action plans have brought about and will continue to bring about revolutionary transformation in China.

For one thing, the digital economy has become the most powerful engine to drive China’s economic development. With Chinese consumers adapting to the digital world with lightening speed, the growth rate of this sector was five times higher than that of the GDP last year. According to one study, the Internet could add 0.3 to 1.0 percentage points to China’s GDP growth rate from 2013 to 2025. This could fuel some 7% to 22% of the incremental GDP growth expected through 2025—and by that point, it could translate into RMB 4 trillion to 14 trillion in annual GDP.

Secondly, the shifting toward the digital economy will facilitate China’s goal of creating a model of economic growth that is based on productivity, innovation, and consumption.

According to official data, China is now the world’s largest e-commerce market: online retail sales totalled 3.9 trillion RMB ($US590bn) in 2015, up 33.3% from a year earlier.

Thirdly, the Internet has unleashed more market forces and exerted growing effect on upgrading industries and the development of innovative businesses in China.

By harnessing the power of the internet, state-owned enterprises have improved their sourcing, sales and logistics systems; streamlined inefficient operations; identified and tracked market trends and boosted their marketing, research and innovation capabilities. Operation of private-sector companies have become more efficient, translating into productivity gains and creating new markets for innovative products and services.

Progressing in leaps and bounds, a number of Chinese companies have become major global players, Alibaba, Tencent, Huawei, ZTE, Xiaomi, Baidu, e-tailer JD.com and travel websites Ctrip and Qunar, just to name a few. Of the ten largest global internet companies, four are Chinese, with their stock market capitalization more than $US 420 billion. While the United States is still in the lead, future prospects point to China going from strength to strength.

Fourthly, the shift to a digital economy not only has changed the Chinese customers’ use of financial tools like e-wallets, e-payment and touch-pay systems, but also lead to substantial growth of cross-border e-commerce. Statistics showed that trade volume of cross-border e-commerce amounted to an estimated RMB259bn ($US 40bn) in 2015 and is expected to reach RMB6.5trillion ($US 990bn) in 2016.

Last but not least, inspired by the bright prospect of digital China, many of China’s neighboring countries have taken China as their important partner in their pursuit of the “digital silk road”. China and Singapore for instance have agreed to tap into each other’s strengths to become together the leaders in the internet industry.

It has been a shared view of many Chinese and European businesses and enterprises alike that there are many areas of potentially lucrative collaboration between China and Europe, but perhaps none as promising as the digital and telecom markets. In the words of Mr. Luigi Gambardella, President of ChinaEU, if one wants to increase the cooperation between Europe and China, the digital sector is the one that sells better.

Strategically, China and the EU have agreed to combine their digitization processes and exploit the complementarities of each other’s competitive advantages: innovative technology in Europe and a huge market in China.

Taking advantage of China’s interest in participating in the European Fund for Strategic Investment (EFSI), the Technical Working Group on China-EU Cooperation on Investment had useful and constructive exchange of views on co-investment vehicle and developing concrete opportunities for China to invest in the Investment Plan for Europe.

As a follow-up on their Joint Statement on 5G telecommunications, Chinese and European Universities are joining hands to prepare for the formal launch later this year of the China-EU Digital Research Center, which aims at creating a systematic work of monitoring and comparing legislations and regulations on e-commerce and cloud services, data protection, 5G and future networks, copyrights and patents so as to achieve a better synergy between Europe’s digital agenda and China’s Internet Plus strategy.

Furthermore, China and the EU have committed to reciprocity in the respective research programs and support for the deepening of interactions and exchanges between the bilateral industry associations dealing with 5G.

Equally encouraging, initiatives like the SilkCamp have been put forth by ChinaEU with a view to boosting high-tech and Internet entrepreneurship and scouting European startups to navigate in the Chinese market and vice-versa supporting Chinese startups to scale up in Europe.

As key investors in the European ICT sector, top-notch Chinese companies like Huawei and ZTE have provided top-notch ICT products and services to operators, enterprises and consumers, and worked closely with their European partners and value chain players to grow the industry and jointly reap the benefits of the digital economy.

In short, digital transformation is underway in both China and the EU but has a long road ahead. Yet, your event today comforts me that we can overcome our challenges and move forward together.

This event and the level of commitment from the partners is a great example of how collaboration and cooperation exists between China and the EU and how we can deliver together on our socioeconomic goals. Indeed, together we can turn our shared vision of building a better connected world of peace, prosperity and progress into reality.

We in the Chinese Mission will work tirelessly with our EU partners to cement our advances and make continued progress in the future.