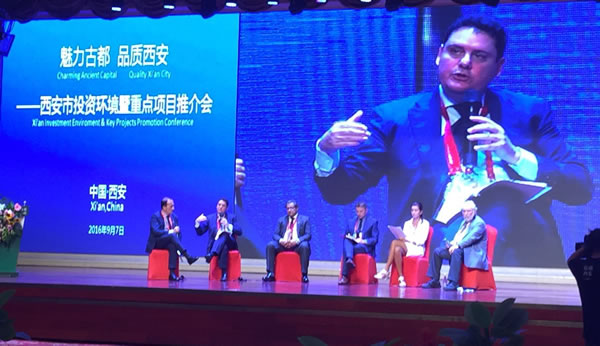 Luigi Gambardella, President of ChinaEU in Xi’an at the Summit of the Silk Road Chamber of International Commerce

During the G20 Leaders Summit in September, connectivity, digital cooperation and innovation were placed high on the international agenda. We now need concrete follow-up proposals.

China’s Belt and Road Initiative has drawn great attention, domestically and internationally, since its announcement in 2013 by President Xi Jinping. Since then, China has made great efforts to guarantee the open nature of the initiative, which includes the Silk Road Economic Belt and 21st Century Maritime Silk Road, and welcomed new projects and ideas.

Thanks to this, enormous opportunities have been brought to countries along the proposed routes. Today, 900 projects are underway, worth a combined $890 billion, including a rail link connecting Beijing with Duisburg in Germany. China says it will invest at least $4 trillion in countries involved in the initiative.

So why not a similar international strategy for a digital Silk Road?

The European Union is creating a “digital single market”, with the main aim to harmonize national regulations by reducing barriers to business operations across the bloc’s internal borders.

If successful, Europe’s information technology markets will become a single market of 500 million internet users, providing EU companies scale and resources to grow beyond the internal market, and making the EU a more attractive location for global companies.

The bloc intends to use the digital single market to revive the European economy, and allow the continent to regain competitiveness and leadership in the global market.

This will not happen overnight, but the plan could have gigantic consequences for the global digital economy, and for China.

China is betting on initiatives such as Internet Plus to boost digital growth as a springboard for economic development.

Why not combine both the EU and Chinese strategies to form a cyber Silk Road treaty? Such an initiative would amplify the effects of parallel programs already underway.

Chinese businesses have reacted to the digitalization of industrial production swiftly. The European manufacturing industry must be ready for this challenge, too. Creating an alliance with China, which is interested in increasing its investment and cooperation in Europe, would be an opportunity for European industries to accelerate their digital transformation.

A cyber treaty should cover the deployment of new digital infrastructure as well as the promotion of new digital services and applications and the approximation of administrative requirements and rules.

China is the world’s largest internet market and will take a leading role in the global development of 5G technology and the internet of things, a network of devices and other objects with software that allow them to exchange data. Europe should be the first to ally with China, allowing it to fast develop its own 5G and IoT capabilities and gain a large share of new markets. China and the EU could conduct joint research and technology trials.

Cross-border e-commerce presents huge potential for small and medium-sized enterprises along the Belt and Road to reach the ever-expanding and increasingly demanding Chinese middle class.

We need a Silk Road fund to invest in SMEs operating in 5G, high-technology and ICT that want to expand into other markets as well as those interested in transforming traditional businesses into digital ones.

The fund could also target high-tech startups, which inject fresh blood into an economy, carrying the enormous vitality and nutrition needed for stronger performance. In China, 13,000 startups are set up every day.

The benefits of cooperation between startups in countries along the Belt and Road are beyond imagination.

Rules that the EU is currently writing into the framework of its digital single market will affect the way the internet is regulated worldwide. Here stands a unique opportunity to harmonize Chinese and EU regulations at the same time.

In particular, negotiations should be opened to harmonize rules for online purchases of digital content, promote affordable high-quality parcel delivery, harmonize intellectual property regimes, and reduce the tax burden in the EU and along the Belt and Road.

Obviously, this is not only a matter for civil servants. CEOs should also be involved through a stakeholders’ forum to provide input on bottlenecks and problems affecting direct investment and trade. Moreover, such negotiations should be based on thorough academic studies of internet regulations in China and the EU.

If the EU’s digital single market is widened to China, this would create a regulatory framework that can be invoked by nearly 2 billion end-users to protect their interests.

ChinaEU advocates a digital Silk Road cyberspace and a transcontinental digital single market encompassing the EU and China as well as countries along the Belt and Road that want to join the initiative.