Senior Chinese and European Executives met with European Commission Vice-President Katainen, Vice-President Ansip and High Representative/Vice-President Mogherini at the initiative of the ChinaEU association to discuss how to boost ICT investments in respective markets and strengthen cooperation in tandem with the next China-EU Summit 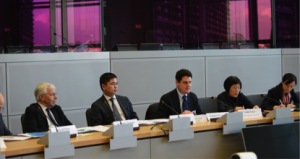 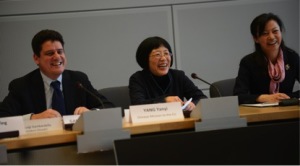 Brussels, 5 February 2015 –On Tuesday, February 3rd, the European Commission hosted three high-level meetings involving senior representatives of leading Chinese and European financial Institutions and ICT companies as well as a high-level delegation of the Chinese Mission to the EU, led by Chinese Ambassador Yang Yanyi. These meetings were arranged at the initiative of a new business association, ChinaEU, based in Brussels and Beijing.

Jyrki Katainen, Commission Vice-President for Jobs, Growth, Investment and Competitiveness, Andrus Ansip, Vice-President for Digital Single Market, and Federica Mogherini, High Representative for Foreign Affairs and Security Policy and Commission Vice-President, met with a select group of Chinese and European ICT industry and banking executives. This unusual gathering provided a unique occasion to strengthen bilateral economic and investment relations in ICT, ​with a view to continuing the dialogue at the 17thChina-EU Summit, to be held this coming June in Brussels.

Five priority areas for cooperation have been raised:

1) Joint development and promotion of mobile technologies for 5G.China and the EU should leverage their technological and market strengths collaboratively, and thus establish a major strategic presence in the future 5G mobile markets globally.

2) Encouragement of Chinese investments in advanced European digital infrastructure and services, in tandem with the new EU Investment Plan of EUR 315bn targeting 21st Century strategic infrastructures. This could be done through the creation of dedicated JVs and public-private partnerships involving both European and Chinese ICT players and financial institutions.

5) Establishment of major ​investment funding and incentives focused on incubating hi-tech startups and collaborative innovation in both Europe and China.

This was the first time a group of Chinese company representatives met with their European counterparts at the headquarters of the European Commission. That sends an important political signal that both sides are committed to bolstering their existing ICT partnerships going forward.

The participants expressed their intention to identify and elaborate specific priority projects at a Technical Workshop, which could be organized together with the European Commission, the Committee of the Regions and the Chinese Government. The proposals would be subsequently presented to the European Investment Bank, for consideration by European and Chinese political leaders during the Summit.

“China and its companies are ready to invest more in European digital markets”, said Luigi Gambardella, President of ChinaEU. “We see great interest from both sides to enhance cooperation in Internet, telecom and high tech segments. There is momentum for increasing the inflow of Chinese ICT investments in Europe, as well as​ creating new investment opportunities for European companies in China. In tandem with Commission President Juncker’s bold effort to stimulate infrastructure investment throughout the Digital Single Market, we should act now to unleash fresh initiatives that will bring benefits to both the European and the Chinese markets. We look forward to the next EU-China Summit, which will be an important occasion to further boost the economic links in these strategic sectors.”

Xiao Ming, Vice-President ofZTE Global and President of ZTE Europe, stated with regard to his company’s posture in Europe: “Our focus is to benefit European society by contributing to the steady development of ICT infrastructure and industry, including Smart Energy. By investing in Europe, ZTE aims to provide citizens with state-of-the-art digital technology to address ever-increasing needs. We are very keen to work together with European industry and the EU Institutions to achieve these objectives. ZTE is active throughout the Continent, contributing constantly to economic growth and job creation. 80% of our European employees are local hires. We don’t want to be seen merely as a Chinese company, we wish to integrate with the local business environment and to be considered a truly European player.” 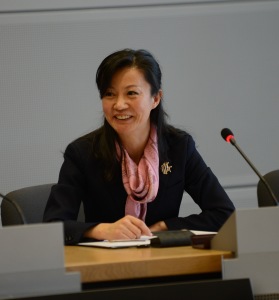 Laura Lei Zhang, General Manager ofChina Mobile International UK, introduced: “China Mobile Group serves over 790 million subscribers, as of June 2014. China Mobile Group embraced the migration of the core driver of telecommunications revenue from mobile communications services to innovative full-services and from communications services to digital services.
China Mobile Group is a big promoter of 4G development, having built up the world’s largest 4G network and continuously endeavoring to develop 4G international roaming services- both voice and data roaming- to 80 major countries and regions. China Mobile is very active –and at the same time cautious– in seeking new investment opportunities overseas and we strive to broaden our presence in international markets, in order to support our own transformation and development. We very much welcome the open attitude of the EU towards foreign investments in the telecommunications and digital sectors.” 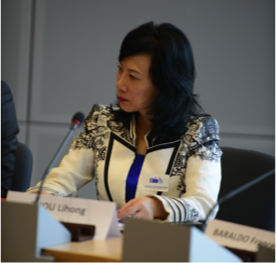 “The EU-China relationship is a story of friendship and strong cooperation” said Zhou Lihong, Managing Director of Bank of China Luxembourg. She continued: “Telecommunication nowadays captures a profound sense of the future, and it is the responsibility of all the actors involved to support the necessary technological development. The banking industry will play its role of strategic partner to tackle these challenging opportunities.”

The discussions focused on the collaboration opportunities that can be generated through Chinese participation in the ambitious EU Investment Plan to mobilize some EUR 315bn of public and private investments in new strategic infrastructures. Together with the realization of a European Digital Single Market, the Investment Plan is one of the flagship initiatives of the new Juncker Commission. China, for its part, is embracing a 21st Century economic model that gives priority to new engines of growth, first and foremost, ICT.

There was a consensus that these extraordinary meetings represent the first step of a sustained initiative pointing to win-win outcomes in EU-China bilateral relations. A guiding aim is to focus on the common interests of Chinese and European businesses, rather than on past differences. The upcoming China-EU Summit, which coincides with the 40th anniversary of official diplomatic relations, can be a showcase for unprecedented industrial cooperation across new digital sectors.