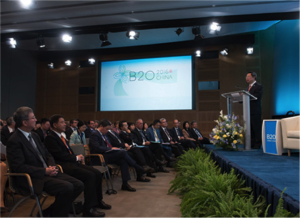 Introduction by Yu Ping, Vice Chair and Sherpa of B20 China

300 business representatives of the G20 countries met last 17 April at the headquarters of the International Monetary Fund (IMF) in Washington DC. This meeting, coinciding with the annual Spring Meetings of the IMF and the World Bank, was the first B20 China Joint Taskforce Meeting. ChinaEU is honored to be a member of B20, which stands for the business representation in the G20 meeting preparatory process. The B20 group discusses policy recommendations for the world economic governance that will be submitted to the heads of state of the G20 countries when they meet in in Hangzhou, China, on 4–5 September 2016. Several strategic recommendations are being considered, among which stands the proposal of setting up an Electronic World Trade Platform (e-WTP). 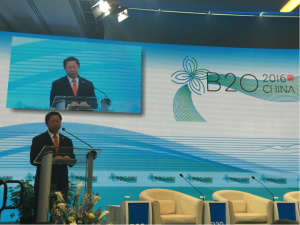 The Washington B20 session opened with a positive note from the IMF, who showed strong confidence in China’s economic growth. Deputy Managing Director Zhu Min admitted that the world economy is facing downgrade with a growth rate at 3.2%, a decrease of two percentage points compared to the IMF’s previous forecast. Government debt has especially become a serious issue, increasing by 42% in two years to reach 106%. Despite the global economic challenges, China’s growth rate was instead upgraded from 6.3% to 6.5%, showing signs of stabilization and recovery, according to both Zhu and Ma Jun, Chief Economist of People’s Bank of China. 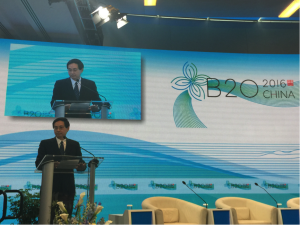 Keynote speech by Ma Jun, Chief Economist of the People’s Bank of China

Business leaders and economists commented on the role of B20 and G20 in restructuring the global economy. A few words were spent also on the leadership of China, which this September will chair the G20 meeting in Hangzhou, headquarters of e-commerce giant Alibaba.

Frank Ning, Chair of Trade & Investment Taskforce and Chairman of Sinochem, proposed that G20 can play a bigger role in rebalancing world economy by bringing more real exchange of goods, accelerating technology and innovation, as well as giving more value to manufacturers, instead of focusing too much on finance.

As Ren Hongbin, Chair of Infrastructure Taskforce and Chairman of China National Machinery Industry Corporation, pointed out that, to mitigate current economic challenges, reform in infrastructure is key, which is also one of the few areas identified by IMF reports as having potential to deliver strong productive gains across all kinds of countries.

China is believed to make a successful leader of B20 as well as G20 to deliver favorable results in addressing global challenges, given its infrastructure-oriented One Belt One Road Initiative and the profound structural reform undergoing in the country.

The B20 has set up five taskforces, namely Financing Growth, Trade & Investment, Infrastructure, SME Development and Employment, to brainstorm on the most appropriate policy recommendations to make to the G20 government leaders. The taskforces met close-door to agree on the scope and drafting of these key business recommendations.

The most notable recommendation discussed in the SME Development Taskforce is the proposal to set up an eWTP. 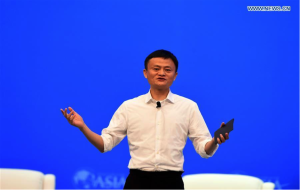 The idea of an eWTP (Electronic World Trade Platform) was originally launched by Jack Ma, Executive Chairman of Alibaba Group and also Chair of the SME Development Taskforce, at Boao Forum (to read Ma Yun’s full speech in Chinese, please click here) in March this year. The platform will facilitate SMEs’ development and integrate public-private dialogue on e-commerce trading modes.

The key goal of eWTP is to promote ‘inclusive’ trade. Inclusive trade refers to reducing the threshold effect, faced by SMEs to participate in cross-border e-trade. The WTP will provide SMEs a transparent and open platform to sell their goods and services globally.

E-trade, often known as cross border electronic commerce, is an innovative trade mode, seen in many ways as a game changer for global trade. It opens new opportunities for revenue growth through cost reduction and reach to more customers, benefiting all businesses and especially SMEs.

E-trade therefore offers a new and efficient channel for SMEs to conduct cross border trade directly, and to set up seamless interactions with their customers.

E-trade brings SMEs interactive connections with significant numbers of both domestic and overseas customers, as well as highly efficient digitalized operations. It helps lower the threshold of cross border trade for SMEs to enter as well as facilitates more efficient flow of products, information and money. In addition to expanding consumption and promoting trade growth, it can also drive innovation and industrial upgrade.

As Mary Andringa, Co-Chair of SME Taskforce, Chair of Vermeer Corporation stated, 95% of the number of firms in the G20 countries are SMEs, generating two thirds of employment and 80% of GDP. Digital economy is key for SMEs to reduce complexity in regulations, access to GVCs and access to finance, among which e-commerce is the only element which can make the difference.

ChinaEU is actively advocating lifting all barriers preventing European and Chinese enterprises to interact in the digital ecosystem and advocating facilitating access to information on export opportunities and legislations. The ChinaEU Digital Research Center, to be launched later this year in cooperation with China Internet Development Foundation (CIDF), exactly aims at monitoring and comparing legislations and regulations in key digital areas, such as e-commerce and cloud services, data protection, 5G and future networks. The research center will not only accelerate information sharing between European and Chinese digital markets, but will also in the medium term help identify best practices.

By the end of May this year, CCPIT (China Council for the Promotion of International Trade), in cooperation with the OECD, will co-organize an e-commerce summit during the China Beijing International Fair for Trade and Services which takes place from 28th May to 1st June. Representatives from both B20 and WTO will attend, sharing constructive views on the implementation of e-WTP. This meeting will be followed by the Second B20 Joint Taskforce Meeting, to be held in Paris on May 31st.