Interview: A new platform between China and the EU will re-launch cooperation on Internet, Telecom and High Tech (New Europe) 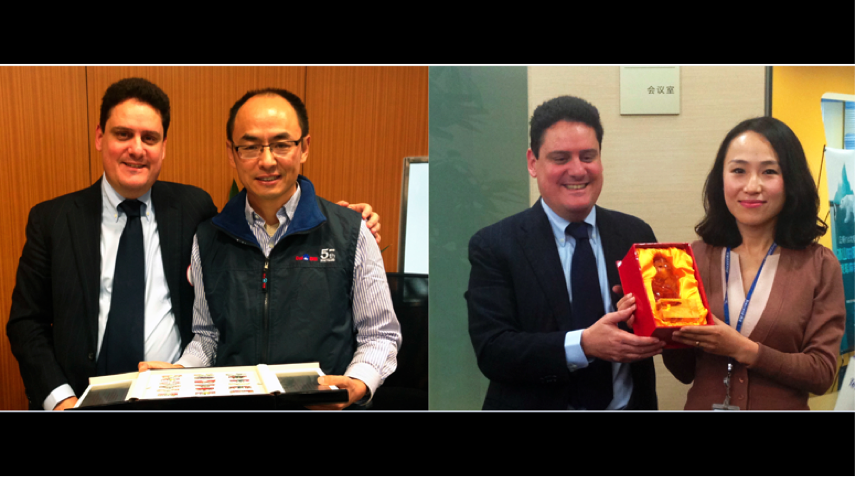 NE: I have to admit that I was very surprised to learn that the Chairman of the European Telecom Networks’ Operators Association (ETNO) went on a visit to “Digital China”. What was the purpose of this activity and who did you meet?

LG: I received an invitation from the China Policy Dialogue Support Facility, a joint initiative launched by the European Commission and the Chinese government (China’s Ministry of Industry and Information Technology- MIIT). The aim was to learn about the current developments in China’s fast-growing Internet market and exchange views with respect to digital policy and regulations. It is very important for Europeans to have a clear understanding of the concrete opportunities and the challenges of China’s digital market. Of course, I was also there to present the opportunities offered by Europe’s innovative services and ultra-fast networks. Besides Chinese policy makers, I met with some of the high-flyers of the Chinese digital and telecoms sector: search engine Baidu, e-commerce giant Alibaba, Internet leader Tencent, phone makers and telecom equipment providers Huawei and ZTE, as well as the two biggest telecom operators, China Mobile and China Telecom.

NE: Where does the EU-China ICT relationship currently stand?

LG: EU-China relations are crucial in today’s global digital value chain, but the potential is not yet fully exploited. I hope that leaders from both sides will soon realize the scale of the untapped potential and will create the necessary environment to facilitate dialogue and cooperation on Internet and broadband policies. Great opportunities lie in the prospect of luring investment and building partnerships between Europe’s major IT and telecom companies and China’s new and fast-growing firms.

NE: What did you notice in China, what is happening there?

LG: Numbers are impressive in China. As we all know, China is set to surpass the US to become the world’s largest economy by the end of the year. Its middle-income population, now amounting to around half a billion people, is expected to grow steadily in the years to come. China is the leading market for a whole range of consumer categories. ICT is among the fastest growing fields and is considered as one of the strategic emerging sectors by China’s government. China’s Internet economy –as share of GDP– is already larger than that of US, France and Germany. Fixed broadband penetrates 55% of Chinese households, while mobile Internet users amount to 871 million people, making China the country with the highest number of Internet users. The market for mobile phone users is almost saturated, with close to 100% penetration rate. Such an incredible scale gives Chinese companies a huge competitive advantage. To give some examples, China Mobile has 800 million subscribers; China Telecom is the largest broadband operator in the world, serving 118 million households. The so-called BATs –Baidu, Alibaba and Tencent– are uncontested leaders in their respective field. Tencent’s Weixin (known outside China as Wechat), a social network product for smartphones, controls an active user base of 438 million people. The 16-year-old Internet giant is today the world’s 5th largest Internet company with a market cap of USD 152 billion, followed by Baidu, China’s most used search engine. Alibaba is now worth more than Facebook and Amazon at USD 278 billion, and has the ambition to serve more than half of the world’s countries by 2019. Europe is not far behind. Chinese phone makers Xiaomi and Huawei are competing fiercely to become the world’s third largest producer after Samsung and Apple. These companies have built their reputation in their home market, but are now intensively looking overseas for new opportunities.

NE: It is clear that the center of gravity of the Internet is gradually shifting from the US towards China. What is Europe doing in the meantime? How can we become more attractive for foreign investors?

LG: The new Juncker Commission has just unveiled a very ambitious agenda for the digital economy. European political and business leaders have a bold vision for the next term: they want to complete the EU internal market for digital networks and services. This vision should be of high relevance to all international players who are looking for investment and growth opportunities in other areas of the world. This is what I have been telling the Chinese companies I met: the new Commission’s plan, if implemented, would create a new unified market of 500 million customers. This means that, very soon, we might have one single digital market instead of 28 national ones. This could greatly attract Chinese companies to be more active in Europe. To date, they have been rather reluctant to invest here, due to the complexity of the member states’ national-level regulations and the excessive fragmentation of the market. But of course, while all eyes are on the New Commission for the creation of a more competitive and unified European digital market, China should do its part to guarantee more equal market access conditions between domestic and foreign investors. And this is simply because European companies can contribute enormously to China’s modernization process, for example by sharing best practices in smart cities or sustainable urbanization.

NE: What is your vision for the future?

LG: My vision is very simple. I want to launch a new platform between all major Internet, Telecommunications and High tech players from China and the EU, with the ultimate goal of facilitating business cooperation and boosting mutual investments. The name of this platform is ChinaEU. Besides regulatory monitoring activities, ChinaEU proposes two very concrete initiatives. First, there will be a High Tech CEOs Roundtable on the same day as the next EU-China Summit, held in Brussels in spring. The objectives of the roundtable are twofold: on the one hand, ensuring that ICT is given a strategic weight at political level and within the ongoing negotiations for the EU-China Bilateral Investment Agreement; on the other hand, facilitating the conclusion of cooperation agreements in strategic areas, such as 5G, cloud computing and Internet of Things.
The second project will be the creation of a separate Sino-European Fund, aimed at attracting investments to feed innovative companies and high tech startups. As next year marks the 40th Anniversary of the Bilateral Diplomatic relationship, this is the right time to put forward a more ambitious agenda for growth and innovation between Europe and China.