In late June, political leaders from China and the EU met for the 17th EU-China Summit, setting a number of priorities for the Strategic Partnership. The three following elements were highlighted in the conclusive joint statement: 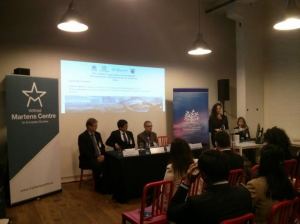 Building on these strong political commitments to set a more ambitious cooperation on digital, innovation and smart urbanization, the Antall József Knowledge Centre and the Wilfried Martens Centre organized an event entitled the “EU-China Cooperation on Sustainable Development with a Special Focus on Smart Cities”, on November 20.
ChinaEU had the pleasure to chair the panel, which focused on defining the concept of smart city, identifying the challenges and the opportunities in developing new smart cities, discussing the scope of the current bilateral cooperation framework and highlighting the experiences of three cities: Riga, Budapest and Shanghai Pudong. 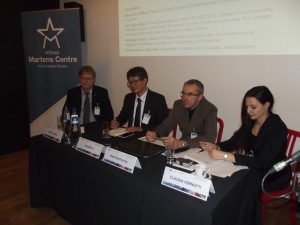 From left to right: Mihaly Lados (Director of the Centre for Regional Studies of the Hungarian Academy of Sciences, West Hungarian Research Institute), Wan Biyu (Vice Chairman of ISO/TC268 SC1 Smart Community Infrastructure and Chief Scientist of the Chinese Society for Urban Studies National Smart City Joint Lab of the Ministry of Housing and Urban-Rural Development-MOHURD), Martins Plikks (Head of the Project Development Division, Riga City Council), and Claudia Vernotti(Director of ChinaEU)
Attending the panel were Martins Plikks of the Riga City Council, Mihaly Lados of the Hungarian Academy of Sciences, and Wan Biyu of the Smart City Joint Lab of the Ministry of Housing and Urban-Rural Development (MOHURD).
It appeared from the discussions that there is substantial difference in approach between China and the EU in the development of smart cities. In China, it is a top-down approach, co-driven by eight different ministries. In Europe, it is a more open bottom-up approach, starting from contribution of the local authorities and communities. Also the scope and the objectives may often be different. Nevertheless, there exist some common challenges, which require similar solutions, and thus create the case for cooperation.
Let’s have a brief look at the urbanization developments and goals in the two regions, and at the existing cooperation framework.
China
In 2011, the Chinese urbanization level crossed the symbolic 50% threshold. The 13th Five Year Plan, which lays out the economic goals for 2016-2020, aims at reaching 70% of urbanization rate by 2030. This means that 350 million people will be added to China’s urban population. There are presently 654 cities in China, of which over 80 have over one million people. Air pollution contributes to about 350,000 deaths a year in China, according to OECD estimates. Among the 112 Chinese cities included in the World Health Organization’s Ambient Air Pollution in Cities Database 2014, only 22 are below the world average level of smaller particles. All of those who traveled to Chinese big cities know what this means in practical terms.
According to data from the China Academy of ICT (CAICT), linked to the Ministry of Industry and Information Technology (MIIT), the previous Five Year Plan planned total investments in smart cities for up to 1.6 trillion RMB (230bn EURO). The goal is to support intelligent upgrading of public utilities and the implementation of smart grids, smart transport, smart water supplies, smart land administration and smart logistics.
Europe
Although the speed of urbanization in the EU is nowhere near as rapid as in China, three quarters of Europeans – around 350 million people – already live in urban agglomerations of more than 5,000 inhabitants. The urban population is continuing to grow and is already consuming 70% of the EU’s energy. Congestion costs Europe about 1% of its GDP every year and most of it is located in urban areas. The main focus of the EU smart city policy measures is to “accelerate development and deployment of integrated energy, transport and ICT solutions at local level to serve EU climate/energy targets”. These are the EU 2020 Goals, which include: 20% reduction of CO2 emissions compared to 1990, 20% share of renewable energy in total energy mix, and 20% improvement in energy efficiency.
EU-China Smart City Cooperation framework
As Li Tie, Director General of the China Center for Urban Development at the National Development and Reform Commission (NDRC), highlighted, “Europe’s experience can be a good example for China, a latecomer to urbanization, in relation to urban governance and management. Dialogues between leaders from both governments as well as city-to-city partnership-building are very important.”
Indeed, Europe has a lot to shares in terms of efficient resources allocation, waste minimization, carbon emission reduction and efficiency enhancement. In these areas, European companies are well positioned to contribute to the huge investment plans for smart cities across China. At the same time though, China is doing remarkable progress in technology and is increasingly developing innovative solutions, which could be adopted also in the European context. For example, ZTE is well ahead with its solutions for smart energy, having developed an innovative wireless charging system for electric vehicles. This is an increasingly expanding business in China, where many cities are promoting the extensive use of electric buses, such as in the case of Hangzhou. 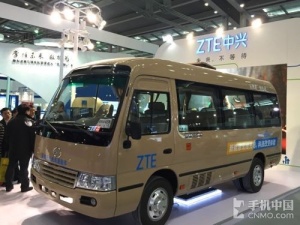 In 2011, at the 3rd ICT Dialogue Meeting between MIIT (Vice Minister Yang Xueshan) and DG Connect (Deputy Director General Zoran Stančič) in Chengdu, it was decided to: 1. develop a EU-China Green Smart City Cooperation, 2. to establish a EU-China Smart City Technical Expert Group, and 3. to select 30 pilot cities from China and Europe. Such cooperation has produced a comprehensive benchmarking analysis of best practices among these 30 cities, 15 in China and 15 in Europe.
Comparing best experiences and sharing information is a first important step for initiating cooperation, but we should also identify concrete steps to move to the implementation of joint smart city projects across China and Europe. We must therefore design the right incentives to engage the industry, the ultimate provider of smart city solutions, in the cooperation framework.