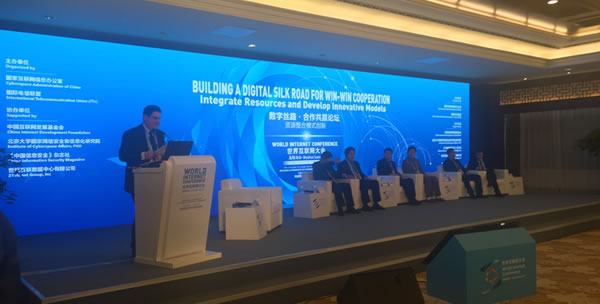 On Wednesday, December 16th, following the opening ceremony by Chinese President Xi Jinping, the first day of the Second World Internet Conference was dedicated to: “Building a Digital Silk Road for Win-Win Cooperation”.

During the whole afternoon, high level representatives from China and the International community exchanged their views on how the Digital Silk Road concept, put forward earlier this year by Minister Lu Wei, Director of the Cyberspace Administration of China, could be effectively implemented through international cooperation on information infrastructure and through the integration of international resources and the adoption of innovative models. 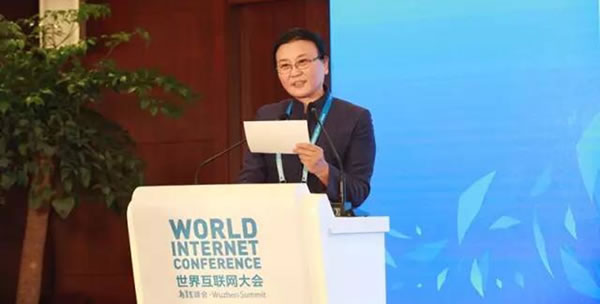 Ma Li, Chairwoman of China Internet Development Foundation, said: “There are challenges in building a Digital Silk Road. People are increasingly using the Internet and the trend brings new challenges in sovereignty, security and development interests. Building a digital silk road for win-win cooperation is not the responsibility of on single country. It is the responsibility of every person that uses cyberspace.” 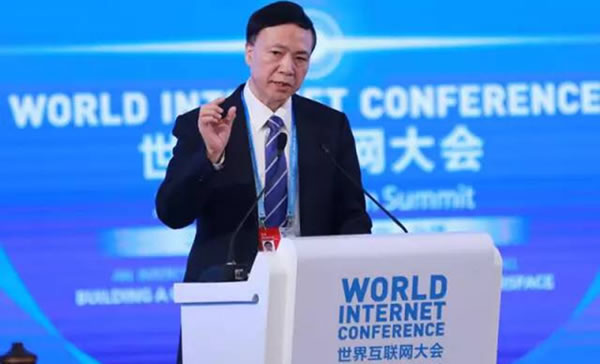 Shi Lirong, CEO of ZTE, said: “As the One Belt One Road strategy materializes, the Digital Silk Road will play an increasingly crucial role; smart cities will be core elements of this vision. ZTE will actively contribute in this process by speeding up Internet connection through the new pre-5G technology, and by providing advanced big data mining and applications through the “Smart City 3.0”. ZTE is ready to fully deploy pre-5G networks by 2016, at the occasion of the G20 meeting in Hangzhou.” 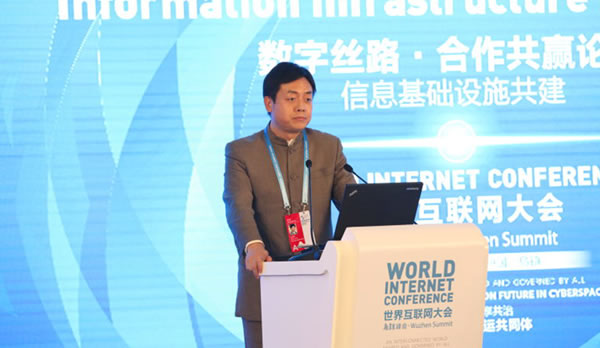 Wang Yiwei, Director of Center for European Studies at Renmin University of China, said: “The Ancient Silk Road highlighted mutual connectivity between East and West. The 21st Century Silk Road instead highlights Internet connectivity: it will be the digital road.” 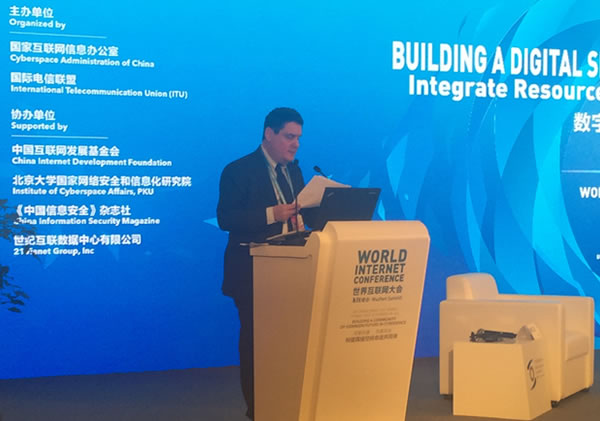 President Gambardella also delivered an introductory speech, in which he reviewed the existing challenges for the development of a Digital Silk Road and stressed the complementarity of the European and the Chinese digital industries. He launched the idea of a Cyber Silk Road Treaty as a key tool to analyze each other’s regulations and harmonize future regulations affecting the Internet sector.

With over 650 million Internet users, China is the largest and fastest growing ICT consumer market in the world. The Chinese ICT sector is currently valued at 433bn EURO (2.9tr RMB) and it is growing at an annual average rate of 7%, the fastest in the world.

If we look at the distribution of the world’s ICT sector though, China does not rank first. It is in fact only at the third position.  In 2012 – the most recent year for which the European Commission published comparative date – China accounted for 13% of the world’s ICT, behind the US (32%) and the EU (23%). The value of the EU’s ICT sector exceeded 516bn EURO (3.5tr RMB) in the same year. I hope that I did not shock anyone of you, because you expected China to rank first, given the size of the Chinese population, which is almost one fourth of the world’s population…

But this shows the tremendous opportunities that you can seize. These figures show the huge growth potentialities of the Chinese ICT sector.  At the same time, in a globalized world, the focus should be on specialization. It would be a waste of resources for China to invest in areas where other continents are strong in, when cooperation is possible.  In this regard, an analysis of the ICT statistics of China and the EU show how complementary both economies are.

China is very strong in manufacturing, being that over 50% of the ICT sector is given by the manufacturing of telecom equipment, consumer electronics and electronic components. The EU instead dominates in high-end innovative services and IT applications, which together contribute for over 55% of regional ICT sector. We had the honor to invite here in Wuzhen a number of representatives of this segment of the European digital ecosystem, such as gaming companies Rovio and Digital Bros, ride sharing application BlaBlaCar and music streaming company Spotify.

The EU is a major technology hub and it can provide a key contribution to the growth of new ICT markets in China, if we conclude the appropriate cooperation agreements. Think about niche markets like Internet of Things, smart cities, big data, e-health, gaming and cloud services, which could be drivers of the growth of the ICT industry in the next decade.

But opportunities for cooperation exist also in the ‘traditional’ telecom segment. China and Europe are home to the world’s major telecom vendors: ZTE, Huawei, Ericsson and Nokia. Synergies in 5G development are clear, especially following the EU-China Agreement on 5G, which was recently signed last September in Beijing on the occasion of the EU-China High Level Dialogue.

The EU-China political and economic relationship is very developed, though there are some challenges, which we need to overcome to improve cooperation in the digital field.

The obstacles that we have to tackle are for example:

I bet that many colleagues here in China are not yet aware of the revolutionary changes, which are being prepared in the European digital ecosystem. Europe is completing its ‘Digital Single Market’, whose main aim is the harmonization national regulations:

If successful, the 28 European ICT markets would become a single market of 500 million Internet users, providing EU companies scale and resources to grow beyond the EU internal market and making the EU an even more attractive location for global companies. Of course, the creation of a European single market for the digital economy would also make it more attractive for foreign players to come in Europe and serve the 28 member states from a single shop. This will not happen overnight but the changes, if adopted will have gigantic consequences for global digital economy.

In fact, the new EU rules will affect the way Internet is regulated worldwide, not just within Europe. And here I see a unique opportunity to harmonize Chinese and EU Internet regulations at the same time!

These changes can offer substantial opportunities to Chinese ICT companies. However, the necessary conditions must be set at political level.  For example, negotiations should be opened in particular to

Obviously, this is not only a matter for civil servants. CEOs should be involved through a stakeholders’ forum to provide their inputs on bottlenecks and problems dissuading direct investment and trade.

Moreover, such negotiations should be based on thorough academic study of respective Internet regulations in China and EU.

Imagine that the EU Digital Single Market initiative would be widened from the EU to China. This would create a market of nearly two billion end‐users!

We urge our governments to set out a timeline for discussions.

All stakeholders should be involved – ChinaEU provides a starting point for a broad stakeholders’ forum.

Together with the China Internet Development Foundation (CIDF), ChinaEU is setting up a new initiative called China-EU Digital Research Center, to study respective regulations and provide regular monitoring of the respective legislations, in order to allow potential investors to have a clearer vision in their investment decisions. The aim is to bring together the most outstanding academic from China and EU specialized in the regulation of the areas that are key for the development of the ICT sector: big data, data privacy, broadband regulation, etc. They will lead a comparative assessment by a mixed team younger researchers based in several universities in China and the EU on the impact of the respective regulatory environments, so as to identify best practices.

The output of this research will be directly relevant to assist decision makers in setting the rules for the ICT sector for the next decade.

The stakes are too high to experiment with a whole sector which generates growth and consumer welfare throughout the whole economy.