“Ctrip will expand international cooperation with Italian partners and is ready to be the ‘Marco Polo’ of the new era, acting as a bridge of cultural exchange between Italy and China” said Jane Jie Sun, CEO of Ctrip.

Ctrip is China’s top travel service provider with 300 million users. Ctrip signed a strategic arrangement with the Italian National Tourism Board (ENIT), as well as cooperation agreements with the Italian industry, including Airports of Rome (ADR), Italian railway Trenitalia, Ferrari Museums, Airports of Milan (SEA), and a series of Italian destinations and businesses associations, including the Region of Tuscany, the Region of Umbria, the municipality of Rome (Roma Capitale) Rome and Lazio Convention Bureau, Fiavet, Federturismo and Unindustria on March 22, a move viewed as a milestone for Italy-China tourism cooperation.

Through the strategic arrangement with Ctrip, ENIT, which is in charge of promoting the unitary image of the Italian tourist offer in International markets, wants to have more high-end, knowledgeable Chinese tourists to explore, visit and spend in the country, pointed out Giorgio Palmucci, President of ENIT.

The deal was inked by Jane Jie Sun and Counselor Luigi Fiorentino, Head of Cabinet of the Italian Ministry of Agricultural, Food, Forestry and Tourism Policies, following a bilateral meeting between Minister Centinaio and Chinese Minister of Culture and Tourism Luo Shugang.

Italy and China decided to set 2020 as the year of Italy-China culture and tourism during Xi’s visit amid a ballooning Chinese outbound tourism market and Chinese visitors’ increasing interest in Europe. Speaking at the second assembly of the Italy-China Cultural Forum held on the same day, Minister Centinaio called for a concrete program of valid initiatives throughout the territory through a renewed role of ENIT and through the engagement of the cultural institutions, the creative industries and the tourist operators of the two countries.

Last year, China’s mainland travelers registered 149.72 million outbound visits, up 14.7 percent from the previous year, according to the China’s Ministry of Culture and Tourism. More and more Chinese visit Italy in recent years with the number reportedly hitting a record of 1.8 million in 2018.

Xi’s historical visit to Italy, the first presidential state visit in ten years and the first leg of Xi’s first overseas tour this year, is expected to greatly capture Chinese travelers’ attention and stimulate visits in the aftermath.

As to Italy, tourism shores up some 13 percent of Italian GDP in 2017 and Chinese buyers consumed roughly one-third of Italy’s luxury goods.

“Italy was the destination of the ancient Silk Road and it is an important member of the Belt and Road Initiative- our cooperation will better unleash the potential of both tourism industries, create more jobs and bring more economic benefits,” Sun told a press conference on March 22 at Hassler Hotel in Rome. 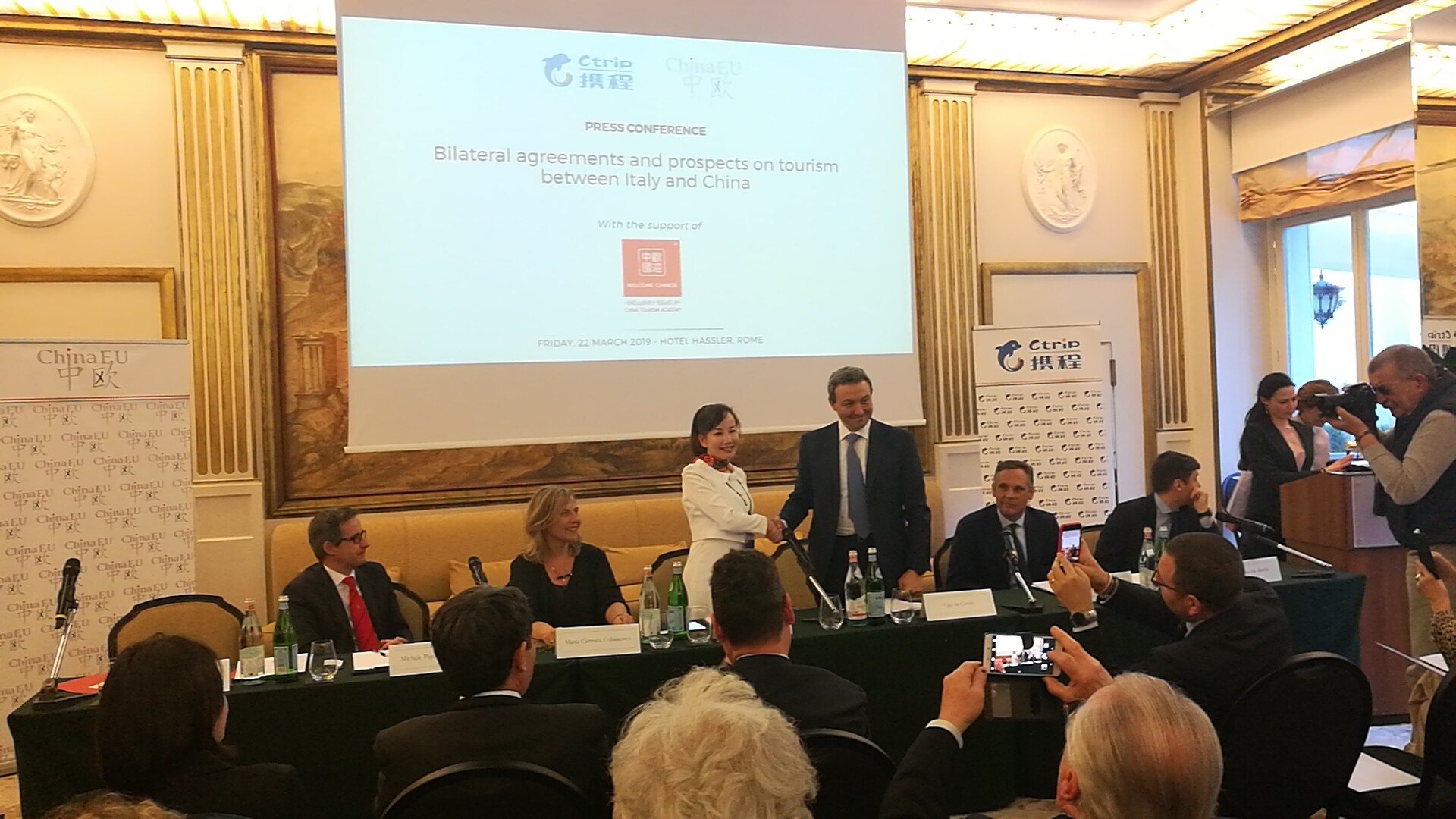 The press conference on bilateral agreements and prospects on tourism between Italy and China held at Hassler Hotel in Rome, on March 22.

Airports of Rome (ADR), Trenitalia and Ferrari Museums are already members of the Welcome Chinese program- the China Tourism Academy-issued certification, dedicated to the hospitality of Chinese travelers overseas. Through cooperation with Ctrip, the three Italian flagships aim to further increase visibility in China, the world’s largest source of outbound tourists.

Ugo de Carolis, CEO of Airports of Rome, said that ADR confirms itself at the forefront in terms of partnerships for the construction of an optimal presence on the Chinese market and of the best customer experience for Chinese passengers. “These efforts have been well rewarded in recent years, with the growth in the number of carriers operating between Rome and Greater China reaching six, with as many as ten Chinese destinations directly connected with Rome,” he said. “We are convinced that there may soon be new opportunities.”

Serafino Lo Piano, Head of Sales, Long Haul at Trenitalia said the signed agreement with Ctrip will provide for the sale on the platform of Trenitalia tickets. “We strive to build an easier intermodal exchange between railway stations, airports and ports, access doors for our country. Only in this way we can intercept foreign tourists arriving in Italy and make sure that they choose the train for their journeys, also contributing to the redistribution of tourist flows to both the mid-and-low season periods and to the small-and-medium-sized art cities, real tourist pearls less known by foreign tourists.”

“The previous collaboration between Ctrip and the Museums of Maranello and Modena has been part of a significant journey of discovery and approach of Chinese tourists, leading to a significant growth of visitors”, said Michele Pignatti Morano, Head of Ferrari Museums. “Today the Ferrari Museums took another step in this direction, which will concretely translate into better attention and more services for this important target audience.”

Business associations hailed that working with Ctrip would be positive. Maria Carmela Colaiacovo, Vice President of Confindustria Alberghi, the consolidator of over 3,000 high-end hotel chains and individual hotel owners, told reporters at the press conference that as Ctrip is key in managing the “unstoppable rise” of Chinese travelers, “we hope in a deep collaboration with Ctrip to increase the arrival of Chinese tourists in our country.”

It is fundamental that Italy does not miss the opportunity of Chinese outbound tourism, said Damiano De Marchi, Senior Researcher at CISET– the International Center of Studies on Tourism Economics, funded by Venice University and Veneto Region. He pointed out both the number and expenditure of Chinese visitors have seen growth: more than 5 million nights spent, with a double digital average annual growth rate of 17%, and an average daily expenditure of 167 euros in 2017.

“Ctrip’s agreements with Italian partners are an important milestone in the cooperation on tourism between the two countries, further promoting Italian tourist destinations in China as well as Italy’s historic culture, fashion, wine, food and other specialties”, said Claudia Vernotti, Director of ChinaEU– promoter of the initiative. “We would like to extend special thanks to Alessandra Priante, Head of International Relations and Protocol of MIPAAFT and Barbara Casillo, Director General of Confindustria Alberghi, for their instrumental contribution to achieve this important result.”